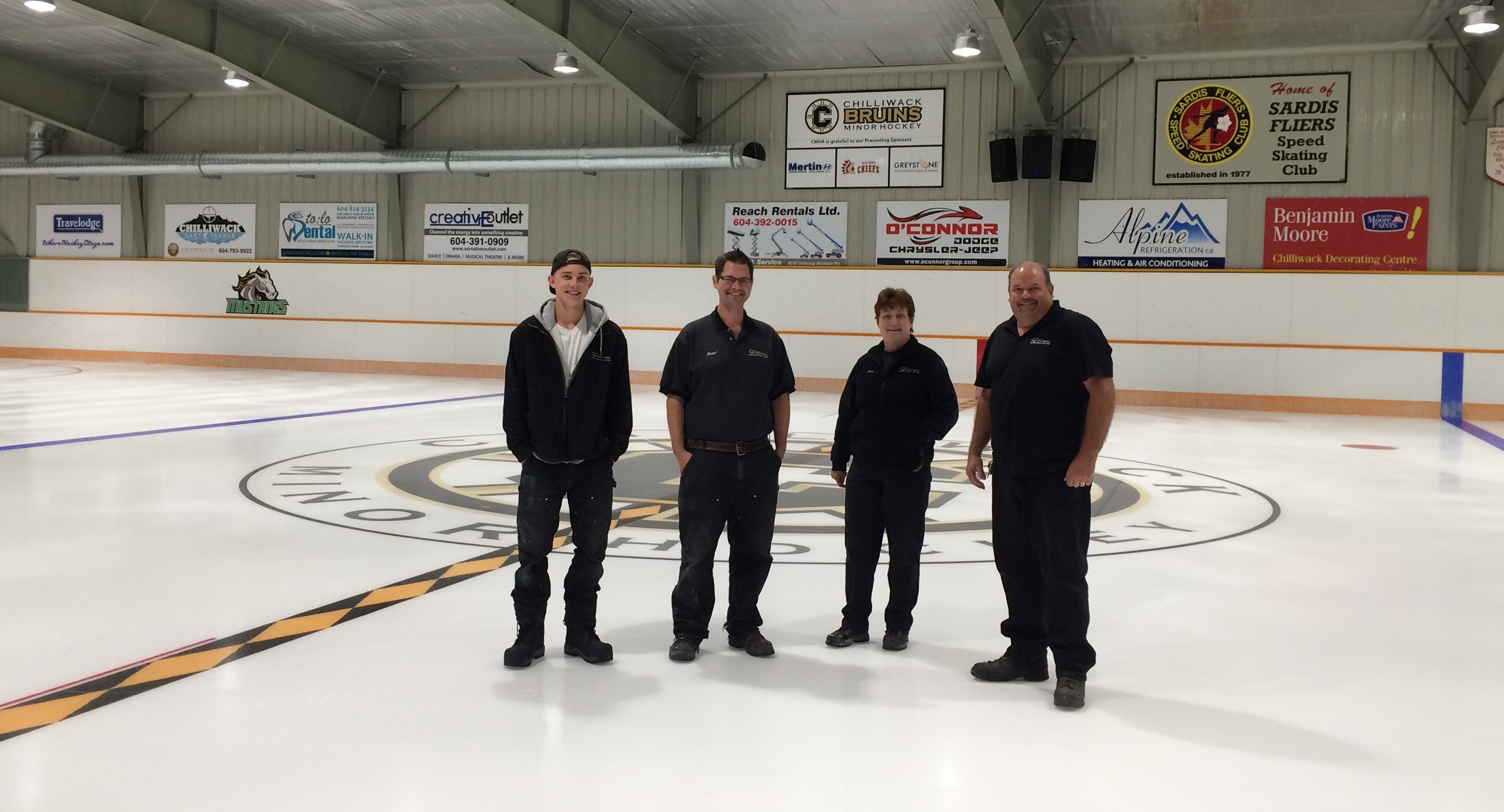 “We are also taxpayers, so if we can save money for the municipality, it helps us out too.”
–Mike Knight, Supervisor of Arenas, City of Chilliwack and Chief Engineer, Twin Rinks Arena

The Twin Rinks Arena in Chilliwack, BC turned 40 this year. Run by the City of Chilliwack, as the name suggests, it’s a twin pad facility, sharing one filling station between the two NHL-sized rinks.

Rink 1 is a multi-use arena with a concrete base. It is used for non-ice activities like lacrosse, roller hockey and roller skating for five months a year, and for on-ice activities for the remaining seven months each year. Rink 2 is on a sand base, used exclusively for ice. The ice for Rink 2 is kept in between 10-11 months a year, depending on user group demand, and both pads run at about an 80% capacity when the ice is in.

In 2000, new compressors were installed an upgrade was made to the ice plant and a low-e ceiling was installed; in 2004, new dressing rooms were added, increasing the usability of the facility.

More recently, however, saving energy and conserving water has been the goal of many of the changes that have been made. In 2014, LED lights were installed, replacing 400W metal halide lighting which resulted in a reduction in energy costs; water-saving shower heads were installed with push-button controls to save on water.

This year, their energy-savings has gone up a couple of notches. Two ageing 200-gallon storage tank were replaced. The tanks store the hot water created from the condenser heat recovery system and the water is used for the ice-making process. They have also installed a REALice water treatment system to replace their need for extremely hot water to make and maintain ice.

Mike Knight, the Supervisor of Arenas for the City of Chilliwack and the Chief Engineer for the Twin Rinks Arena says they installed their REALice system and started putting the ice down on Rink 2 three days later.

Doing Everything They Can to Save Energy

“We do everything we can to save energy,” says Knight. “The hardest thing about REALice was convincing the people in-house that it would take the micro air bubbles out of the water. Our ice maintainers were concerned about getting air in the system by using colder water. There was a fear of change at the beginning, but now they see it looks exactly the same as regular ice.”

“They think they need the hot water to make the ice nice and smooth, that’s the big thing that I found from our staff. Heck, I was the same – that was drilled into me from the first ice-making class I went to: ‘You HAVE to use hot water. If you use cold water, you can’t make good ice.’ But (with REALice) our’s is doing just fine, with a nice, smooth, consistent sheet.”

Using a blend of cold tap water with the water from the heat recovery system, Knight’s team is using REALice-treated water to resurface the ice.

“We’ve gone down to about 70 degrees Fahrenheit (for our ice resurfacing water),” Knight says. “Before, we were heating our water to 160 degrees. The boiler still gets used, but we are hoping we are not going to have to use it very much any more.”

Since making the ice for Rink 2, Knight says they’ve been able to increase the brine temperature by a couple of degrees Fahrenheit already. The ice for Rink 1 will be ready for the beginning of September, also using REALice-treated water.

“Using REALice, this twin pad is expected to save over $14,000 in electricity costs and $10,000 in natural gas costs the first year alone,” says Gabriel. “Over a ten-year period, the REALice System is expected to save the City of Chilliwack $226,441 – over a quarter of a million dollars! Those are impressive numbers.”

“Although most of our customers are using tap water, or slightly tepid water with the REALice System, the Twin Rinks operations team have an excess of warm water and are using it instead of wasting it,” Gabriel says. “It’s working well for them and the 3-D printed REALice valve is made to withstand hot temperatures as well as cold, so there’s no problem from our point of view.”

“We are also taxpayers,” says Knight, referring to him and his team. “so if we can save money for the municipality, it helps us out too.”

The future of the Twin Rinks Arena includes the construction of a third pad, to be operational in 2018.

“I guess the third sheet will mean a name change for the arena,” Knight says with a chuckle. “But I’ll bet you that even if the name gets changed, people will call it “The Twin Rinks” forever. Some things are pretty hard to change,” he says.

The Twin Rinks Arena has a full-time staff of five and 18 part-time staff including skate patrollers and cashiers.